Seasonal moisture gradients inevitably lead a small change in wood volume. Of course, these changes does not matter for cutting boards, nevertheless we have to consider it in practical use of the board.

In wintertime, house heating is reason of moisture decrease, and wood dry out; in summertime, moisture is increasing and wood is splaying out. In addition, it is clear you should not keep boards within easy reach of heating appliance. The only way to protect wood of moisture gradients is covering with slushing oil. In cutting boards case it is necessary to quite often (preferably not less than once a month) smear with mineral oil board surface to fill wood pores. With proper care, board will serve you at least 10 years.

If you are interested in saving your board usability we recommend you to treat the board with mineral oil. This procedure is advised to prevent mold, growth of bacteria and odor absorbing. We do warn you – use only mineral oil but vegetable one due to its rancidification.
To treat the board with oil just pour and rub it on all surfaces with soft cloth. Please, do not be afraid of overflowing – wood cannot soak up more oil than it able to soak up. Then dry the exessess with cloth.

It is possible to improve the board with adding beeswax on oil. The beeswax for a long time is used to make wood smooth, soft, waterproofing and more durable.
To get a composition take 4 parts of oil and 1 part of beeswax. There is two ways to mix ingredients:

Heat the oil in bain marie then add beeswax chips;
Put the mixture in the microwave to 30-45 sec.

Then rub up the mix. Unlike with pure oil, cooling it fills in each pore and split, achieving smooth, firm and durable surface that yield to polishing with cloth. Making a point – the composition could be heated and used as effective as before.

It is necessary to treat with oil (or mixture) the board at least 3 times with 5-6 hour interval – the oil should soak in. The treating procedure is recommended to repeat monthly.

Let’s get acquainted with another ways of care:

Shrinkage is the process of reducing the size and volume of the wood due to reduced amount of water in it. Shrinkage of wood caused by content of water in the dry air, and there is process of returning to the environment of the adsorbed water from the cell walls of the wood. Thickness and size of the cell walls reduce because of disappearance of the absorbed water. Excessive shrinkage of the board may be the cause of the occurrence of cracks; shrinkage of a one side may be the reason of bending the cutting board.

Swelling is the process of increasing in size and in volume of wood due to increasing water in the wood, which depends on content of water in moist air or water.

Most professional cooks use End Grain Cutting boards. Why? There are several reasons:

Let us show you the difference – here we slashed a common board and end grain one using the same knife and putting the same effort. Then we treated the board with oil and got some macro-photos from one and the same distance and shooting angle.

Image 1. Cuts at an oak face grain cutting board

As you see a sharp knife made deep cuts in wood. Wood grains are completely cut up and in later use it will fall. 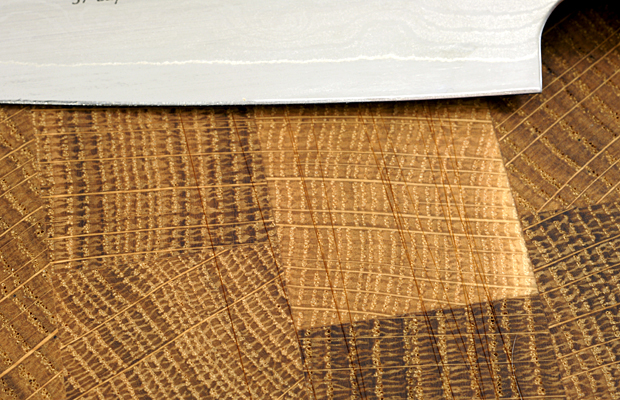 Cuts are still evident but less distinct because the knife doesn’t cut up grains passing over by them.

Then we treated each board with mineral oil. 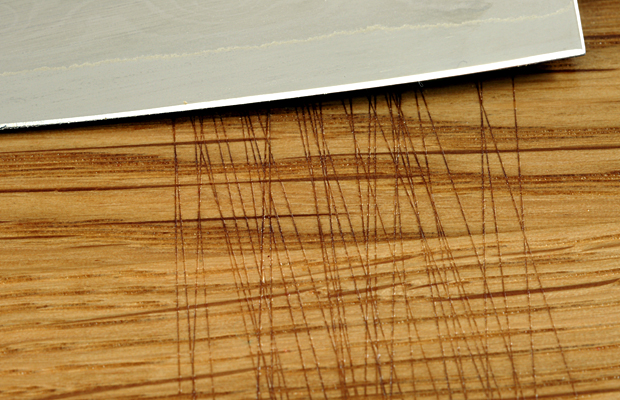 After oil treating procedure cuts become more distinct than before treating. Cutted grains was oiled that made wood darker.

Here the cuts are almost imperceptible, because in this case a knife doesn’t cut the grains across but make cuts from the end of the grain. It oiled to a few millimeters deep whereas on face and edge grain cutting boards are covered with a thin oilslick that doesn’t permeate the wood. Grain is swelling and closing due to oil treating guarantees board’s hygiene and saves its unique layout.

The boards are made from high quality wood where moisture content is less than 8%. We use mainly hard wood like an oak, an ash, a walnut, a horn beech, a maple, a birch and small amounts of hard African and American wood species like padauk, sapele, makore, mahogany, amaranth, zebrano. We can make Pine End Grain Cutting Boards, but these boards are quite soft (a hardness of pine end surface is 2 times less than harness of oak) and it is better to use it with dry foodstuff like bread, cheese, etc.

The boards are treated by food grade mineral oil to prolong service life, to protect against bacteria and to make beautiful appearance of a board. Mineral oil is tasteless and odorless. We use analog of medical mineral oil – the liquid paraffin intended for ingestion. You can buy it in a pharmacy. Sunflower, olive, and other food grade oils cannot be used for treatment, because after a while they become bitter and will transmit this taste to foodstuff. Linseed oil is the only exception, but even it is worse than mineral oil.

Once the trees are about 25 years old the cork is traditionally stripped from the trunks every nine years, with the first two harvests generally producing lower quality cork. The trees live for about 300 years.

The cork industry is generally regarded as environmentally friendly. Cork production is generally considered sustainable because the cork tree is not cut down to obtain cork; only the bark is stripped to harvest the cork. The tree continues to live and grow.

The sustainability of production and the easy recycling of cork products and by-products are two of its most distinctive aspects. Cork Oak forests also prevent desertification and are a particular habitat in the Iberian Peninsula and the refuge of various endangered species.

or browse by scientific name

There are the following payment methods:

How to make an order?

4. Select the most convenient payment method;

As soon as the payment is performed your order executing will be started and advice of payment will be sent to specified at registration email address.

Read more...
NEW STUDY SHOWS WOOD CUTTING BOARDS,
NOT PLASTIC, ARE SAFER FOR FOOD PREPARATION
Despite the prevailing wisdom, bacteria die much more quickly on wood.
For decades now, cooks in homes and restaurants have been urged to use plastic rather than wood cutting boards in the
name of food safety.
The fear is that disease causing bacteria – salmonella from raw chicken, for example – will soak into a cutting board
and later contaminate other foods cut on the same surface and served uncooked, such as salad ingredients. It’s become an
article of faith among “experts” that plastic cutting boards are safer than wood for food preparation because, as the thinking
goes, plastic is less hospitable to bacteria.
It seems reasonable, but it just ain’t so, according to two scientists at the University of Wisconsin-Madison’s Food
Research Institute.
Dean O. Cliver and Nese O. Ak, food microbiologists in the College of Agriculture and Life Sciences, have found that
in some as yet unknown way wooden cutting boards kill bacteria that survive well on plastic boards.
“This flies in the face of prevailing wisdom”, says Cliver, “It isn’t what I expected. Our original objectives were to
learn about bacterial contamination of wood cutting boards to find a way to decontaminate the wood so it would be almost as
safe as plastic. That’s not what happened.”
Cliver is quick to point out that cooks should continue to be careful when they handle foods and wash off cutting
surfaces after they cut meat or chicken that may be contaminated with bacteria.
“Wood may be preferable in that small lapses in sanitary practices are not as dangerous on wood as on plastic,” he
says. “This doesn’t mean you can be sloppy about safety. It means you can use a wood cutting board if that is the kind you
prefer. It certainly isn’t less safe than plastic and appears to be more safe.”
Cliver and Ak began by purposely contaminating wood and plastic boards with bacteria and then trying to recover
those bacteria alive from the boards. They also tested boards made from several different species of trees and four types of
plastic. They incubated contaminated boards overnight at refrigerator and room temperatures and at high and typical humidity
levels. They tested several bacteria – Salmonella, Listeria and enterohemorrhagic Escherichiacoli– known to produce foodpoisoning.
The results consistently favored the wooden boards, often by a large margin over plastic boards, according to Cliver.
The scientists found that three minutes after contaminating a board that 99.9 percent of the bacteria on wooden boards had
died, while none of the bacteria died on plastic. Bacterial numbers actually increased on plastic cutting boards held overnight at room temperature, but the scientists could not recover any bacteria from wooden boards treated the same way.
So where did we get the idea that wood isn’t safe? Cliver and Ak don’t know. They did a literature search and have
not found any studies that evaluated the food safety attributes of wood and plastic cutting boards.
Although Ak, a graduate student at the Food Research Institute, will soon return to Turkey, Cliver hopes to continue
the studies. A major question now, he says, is why wood is so inhospitable to bacteria. He and Ak have tried unsuccessfully to
recover a compound in wood that inhibits bacteria.
The first year of the study was funded by the Food Research Institute with unrestricted food industry gift funds; other
funding sources are now being sought. Cliver and Ak will soon submit an article based on the research to a referred scientific
journal.
http://www.kitchensource.com/kitchen-islands/pdf/woodvsplastic.pdf
Read more...

LUSOCRAFT WOOD is a Portuguese company located in the Montijo county, whose main activity is the manufacture of wooden decoration articles, ferrous and non-ferrous metals, among many others. It intends to give dynamism in Portugal, the handmade concept, using end grain manufacturing techniques, very much in vogue in the United States.

In the launch phase of the brand, the bet focuses on the segment of cutting boards, where the standard can be linear, 3D or customized. Design and creativity is a dynamic process in which

Constant transformation, which together with the usefulness of the product can obtain small works

Of functional art, adding to the surrounding space another glamor.

The noble and exotic woods used for the manufacture of our products are of high quality, which are carefully selected according to their hardness, toughness, color, shaft and durability. The adhesives used are certified by the U.S. FDA-Food and Drug Administration, which gives the consumer an added value in the value proposition.